Kyoto, Japan, is world renowned for its historic architecture, rich cultural history and beauty. Kyoto Station is the gateway to the city and was designed by visionary architect Hiroshi Hara in the early 1990s. The station opened in September 1997. Shortly thereafter, on December 11, 1997, at the United Nations Framework Convention on Climate Change (UNFCCC), the Kyoto Protocol was signed. Since then Kyoto has become synonymous with climate leadership.

In 2009, the Japanese government selected the city of Kyoto as an environmental model city. Thereafter, the Kyoto Station Building Development Co., Ltd., approached the city to discuss the city’s environmental targets and their interest in working together to help reduce Kyoto Station’s energy use—the single largest building energy user in Kyoto. At the time, typical HVAC system replacements might achieve 10% to 15% in whole-building, source energy savings, but the project owner wanted to dig deeper.

To describe Kyoto Station as a mixed-use, transportation-oriented development would be an understatement. With a gross area of over 235 942 m2 (2,539,659 ft2), nearly a dozen different occupancy types, and more than 77 million users each year, it is truly a city within a building complex. Occupancies include the train station, offices, a shopping mall, department store, a hotel, theater, many restaurants, a museum, specialty shops and various support spaces. 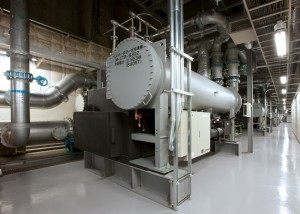 To bring this building complex into compliance with the Kyoto emissions targets, the overarching design brief for this project was to achieve a 30% reduction in whole-building source energy use and a 60% reduction in annual plant energy use. The secret to achieving this comes as no surprise—teamwork. 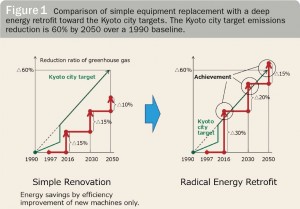 Kyoto Station was the first project in Japan to apply a full life-cycle commissioning process—from the predesign phase, nearly continuously, through the operations phase and for three years thereafter. Commissioning meetings were held once or twice a month for 7.5 years. This life-cycle approach enhanced opportunities for interactive communication among the owner team, commissioning members and the design team during the predesign, concept design and final design phases. At the construction phase, the building operator and constructor were added to the meetings, and many new ideas for energy savings and staging of construction were captured. This integrated process led to the successful achievement of significant energy savings on this project. (Figure 2).

At the time of the renovation, the existing gas-fired steam system was very inefficient, so the energy retrofit team immediately focused on reducing the chiller plant size and increasing its efficiency. However, in renovations, central plant size reduction is often difficult as there is the possibility of undersizing it and having a shortage of cooling or heating capacity. This can be a considerable risk for the designer.

For this project, the annual trend of chilled water demand in the existing building was carefully researched before the design phase began.

Using actual energy consumption data for the prior three years, and energy savings calculations from reducing the outdoor air volume (while still satisfying sufficient air volume per person), it was determined that chiller plant size could be reduced by 20%, even with the inclusion of one backup chiller (Figure 3).

This chiller plant size reduction would offer the following advantages:

With over 77 million visitors per year, Kyoto Station is the second largest station and one of the largest buildings in Japan.
iStock.com/bee32

Considering Options
A variety of central heating and cooling systems were carefully studied to better understand their initial cost, energy cost, operating cost, primary energy consumption and relative peak demand. These systems included a gas-fired steam system (which is the same as the existing system), an all-electric heat pump system and a gas-driven absorption chiller, among others (Figure 4). Altogether, 13 variations of central heating and cooling systems were compared.

The existing steam system had a lot of heat loss and was very low in efficiency. If this gas-fired steam system were changed to an electric chilled and hot water system, large energy savings could be realized. An electric chilled and hot water system, using variable speed centrifugal chillers and air-source heat pumps along with gas-driven cogeneration, was determined to be the most efficient. However, this system was the most expensive compared to the other options. To meet the budget, there was an initial cost reduction by leaving some of the existing steam system piping that serves the hotel and theater AHUs in place temporarily. This modified system was ultimately selected and used in the building (Figure 5). 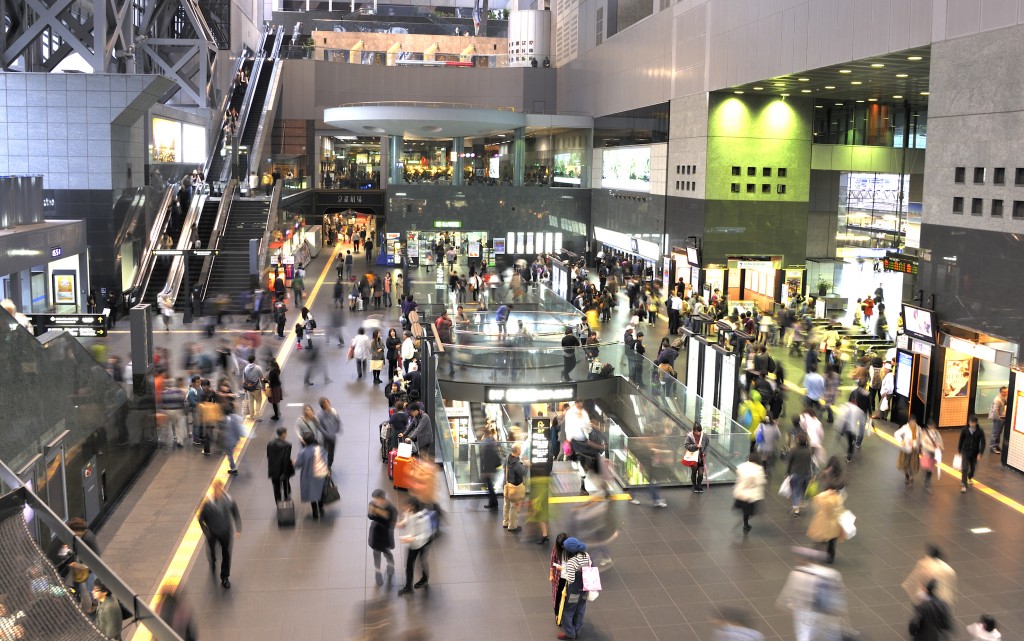 Adding Value by Subtracting Energy
Several other systems were also used on this project to improve efficiency.

Heat Recovery Chiller
A heat recovery chiller was chosen for reheat for dehumidification in summer and simultaneous cooling and heating in winter. This chiller reclaims the heat produced as a byproduct of the cooling process and can produce hot water more efficiently than an air-source heat pump at low loads.

Heat Pump System Using Well Water
This site has an abundance of well water, which is used as drinking water, flushing water, makeup cooling water and as a heating energy source in the winter. The well water temperature is fairly constant throughout the year compared to the outdoor air temperature, which contributes to highly efficient operation of the heat pump system. The well uses a 530 kW well water pump system 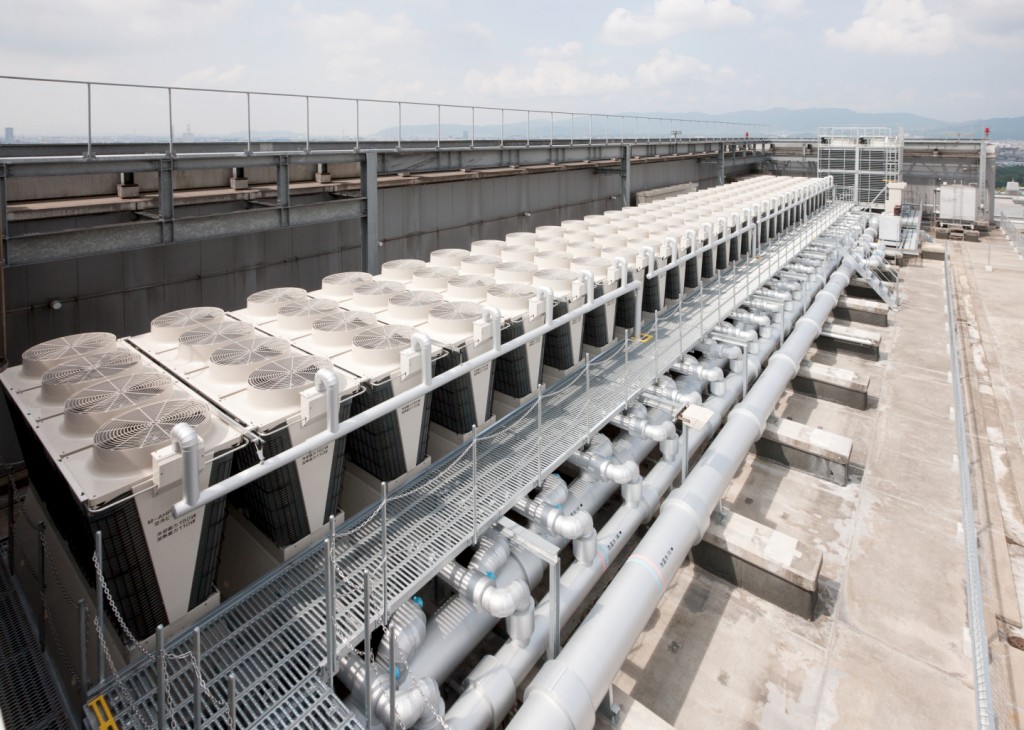 Reducing the size of the chiller plant created equipment replacement space. For instance, the new air-source heat pumps can be located on the roof.
NIKKEN SEKKEI

Central Plant Operation
The chilled water plant requires six chillers, including redundant units for maintenance and backup. A variable speed centrifugal chiller is more efficient in partial loads than a constant speed. So the best option was to select six variable speed machines. But because of cost limitations, a combination of four constant speed and two variable speed machines was selected. To cover the partial-load efficiency, new control logic was developed by the commissioning team and it was adopted in the building energy management system (BEMS).

Cloud-Based BEMS
The building energy management system (BEMS) for this complex has approximately 15,000 measurement points, which are gathered every one minute. Using the cloud, all BEMS data can be accessed by the internet, from anywhere. Gathering data faster than usual allows modification of heat source operation quickly for optimal energy savings.

And the Beat Goes On
Much of Kyoto Station is operated 24 hours per day. Like many energy retrofit projects, this complex needed to maintain normal operation. Given the wide variety of building uses and varying occupancy levels, this was particularly challenging for this large-scale, complex project. There was added pressure to complete the project as fast as possible to both meet the Kyoto protocol and reduce energy costs and emissions. The construction phase was completed in just 18 months. Construction was staged, in part, with the changing seasons. For example, as chilled water demand declined with the winter approaching, the old chillers could be sequentially replaced. The ongoing commissioning process since construction completion has contributed to continued improvement in energy use reductions.

Results
Energy consumption of the central plant system was reduced from 455.0 TJ (431 257 MMBtu) to 182.7 TJ (173 170 MMBtu), when comparing 2009 (before renovation) and July 2018 to June 2019 (three years after renovation completion). The reduction ratio of the central plant system is 59.9%. The whole-building primary energy savings is 33.4% (Figures 6 and 7; Figures 8 and 9). The central plant system COP, based on primary energy consumption, improved from 0.73 to 1.64. Chilled water transportation energy was reduced by 80.4%. Annual water use was reduced by 13.4% because the makeup cooling water for a centrifugal chiller is much less than that of a steam-driven absorption chiller.

Cost-Benefit
Energy cost was reduced by $5.7 million dollars (USD) per year after this renovation.

The Kyoto Station building needed to renovate its existing central heating and cooling system to a new one because it was 20 years old and near the end of its useful life. The simple payback is 5.7 years by energy cost reduction alone (Figure 10).

Conclusion
As the targets for continuing to meet the Kyoto Protocol are increasingly aggressive, Kyoto Station ownership knows they have their work cut out for them. They are maintaining a close watch on energy use and are always seeking opportunities for improvement and fine-tuning of systems.

Future projects include changing the remaining steam system serving the hotel and theater to a hot water system, reducing air-handling unit volume to the minimum necessary in other areas, introducing high-efficiency fans and increasing free-cooling, where possible.
Kyoto Station has become a world-class energy retrofit example in a global environmental model city.